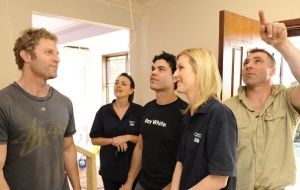 Several months ago, a television reporter sat at her desk reading an email. It told one of the saddest stories she had ever heard – the parents of a family of five children aged between just five and seventeen years of age had both been diagnosed with incurable cancer. With no family support in Australia, the parents had originally hoped the children could stay together under the legal guardianship of the eldest daughter Nansey, who would soon turn 18. But as the family home had since been sold to pay for medical costs, it was hard to see how this could be possible. The Hanna family’s neighbour had written the email asking for help as she felt time was running out.
The reporter was Sarah Stewart from the Channel 9 show “A Current Affair” (ACA) and she immediately decided to do everything she could to help the Hanna kids. Hoping to raise enough money to pay their rent for a year, Sarah was thrilled at the general public’s immediate response when the first story aired.
Around the same time, Vince Movizio, principal of Ray White Fairfield, heard of the Hanna family’s plight via a different source. Vince’s assistant Tony had a grandmother in the same hospital as Mr and Mrs Hanna and relayed their story to him. As a father himself, Vince was deeply affected.
As the weeks went by, Sarah kept the public updated with regular segments on ACA and donations began to pour in. The total quickly flew past the value of a year’s rent and Sarah suspected it might be possible to buy the Hanna kids a unit. She began contacting local real estate agents to look for properties and ask for their support. One of the agents she called happened to be Vince from Ray White.
“We called a few agents in the area without much success. Then luckily, we called Vince. Vince has a big heart and never hesitated to help us from that day forward, expecting nothing in return. He went above and beyond and never said no” Sarah said. In May, the story took an even more tragic twist – both parents died within six days of each other. After ACA aired the sad news, the appeal really began to snowball. The donations came flooding in, and Vince and Sarah were no longer searching for a unit; now they had enough money for a townhouse. The tally continued to climb and then the hunt changed direction again. Now they were looking for a house for the kids, but finding one became an uphill battle. The property market was heating up and houses in the right price bracket were selling almost before they could be advertised for sale.
“Vince put a full page ad in the local paper and did a leaflet drop calling for suitable properties. He put everything into it. We eventually found a house the kids fell in love with, but it was up for auction through another agent. Vince acted on our behalf and although we even bid over our limit, we missed out, which was really disappointing” Sarah said.
As luck would have it, the very next day another property came back on to the market after the original buyer’s finance fell through. The house fell into the right price range and this time, the vendors knew the Hanna’s story and wanted their home to go to them. Vince successfully brokered the deal and the five kids finally had a new home.
As the house required some work, Sarah and the station producers began to contact tradespeople. Two of those people were builder Brad Trethowen, owner of Bradco Constructions and designer Jason Sullivan from CH9’s “Home Made”. After hearing the Hanna’s story, both agreed to help and incredibly, both refused any payment. And they weren’t alone. What was supposed to be a minor renovation turned into a full-scale revamp of the entire home.
Jason met Vince at the property soon after it was purchased. He spent weeks before the renovation organising every aspect and choosing colours, furniture, fixtures and fittings for every room. 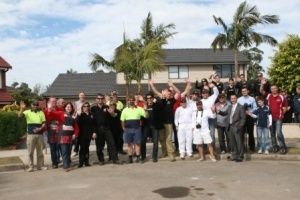 Two weeks before the project was due to start, Brad went to the house with Jason and Vince to start planning the work. His challenge would be to co-ordinate a large group of volunteers to complete an extensive renovation in just ten days that would normally take months.
Around the country, others were also watching the Hanna’s plight and were moved to get involved. Among those was Eric Vuitton, Director of Sydney Painters. Having come to Australia himself just twelve years before, Eric understood first-hand the Hanna’s predicament in being alone and he wanted to help. He contacted the station and offered to paint the inside of the house.
Day one of the renovation rolled around and Vince showed up along with all the other willing workers. Vince had organised a roster of the Ray White Fairfield team to take turns helping out, but that plan soon changed. Every day for the entire ten days, Vince was one of the first to arrive and one of the last to leave, working up to 14 hours a day and loving it. On top of their rostered days, many of the Ray White team also turned up after a full day’s work in the office to help out on-site.
Registered builder Brad said Vince is a “bit of a legend.” Prior to meeting Vince, Brad had had the common impression most real estate agents are focussed on money and not likely to get their hands dirty. He says now he has a whole different perspective.
“Vince really got into it. He bagged a brick fireplace, laboured, ripped stuff out, carted rubbish and did landscaping. On top of that he found several tradespeople we needed and had his team there every day too, taking turns to help. The whole experience was intense and there was a huge satisfaction for all of us in helping a family in need” Brad said.
Designer Jason said he was pleasantly surprised to see Vince out of a suit and working as hard as anyone.
“It was obvious how much he cared about those kids – everyone just wanted to give so much. It was such a journey, a unique experience” Jason said.
Painter Eric ended up painting every surface of the house inside and out, with eight of his team working alongside him on-site. He said it was good to see ACA working so closely with Vince and showing the public a different view of real estate agents.
“It was amazing and shocking; an awesome experience to see all these people coming together and the kids so happy with the place” Eric said.
Vince himself says being able to help the Hanna family is the best thing he’s ever done and he intends to be part of the kid’s lives forever. Well after the house was revealed to the kids and the cameras stopped rolling, Vince was busy living up to his promise.
Nansey Hanna, now 18, said it was Vince who organised a trailer to move the family into their new home and then stayed for hours afterwards helping them move their furniture.
“Vince and the Ray White guys did so much more than I expected and I still see them nearly every day. We are so thankful to everyone who was involved – it really is unbelievable. The sadness is still there, but it’s a good fresh start for us” Nansey said.
Sarah Stewart from Channel 9 said the generosity of Australia to donate their money and time was incredible and estimates over a million dollars was donated in cash, goods and services.
“The experience restored my faith in people. In the middle of an economic crisis everyone involved just put their problems aside for strangers, so many people investing so much time and energy. It was nothing short of inspirational” Sarah said.